Detect the undetected at millimetre
precision and see all threats to airport safety.

Passenger air traffic has grown at an unprecedented rate during the last 5 years, a trend that is expected to continue in the future, with regions nearly doubling their passenger traffic by 2020. Airport authorities and airlines are increasingly facing safety threats to passengers, crews and aircraft caused by

Given the high impact of potential accidents and incidents – both in terms of damage to aircraft and fatal crashes with loss of lives – there is a continuous adoption of best practices and technologies to mitigate risks associated to the “safety of flight” (SOF). Today, all airports rely on vehicle patrols for periodic inspections of runways, comprising several limitations, such as poor visibility and inconsistency of personnel performance (causing human errors). Only a few airports have radar-based solutions due to their high price and limited features, resulting in a business case that is not sufficiently convincing to airports and airlines.

These solutions only cover the runway surfaces, thus presenting very limited bird detection capabilities. Importantly, these solutions are not designed to detect drones – which pose a growing threat to the aviation industry.

Pan Tilt cameras located along the runway will supplement the radar sensors.

The sector coverage for birds and drones is designed to provide coverage of departing and approaching aircraft. Typically, aircrafts taking off will rotate and lift off well before the end of the runway and coverage is needed from a point before the point of rotation. As aircrafts climb out, they will fairly quickly reach a “drone safe” altitude and hence coverage does not need to expand that far out from the runway. Aircrafts approaching the runway will however in the final segment be descending on a 3 deg glidepath to the runway. This means they will go below the “drone safe” altitude at longer distance from the runway, requiring the sector coverage to extend further out from the runway.

The FODDBASA system is a multi-sensor system designed to detect FOD, drones and birds in and around airports.

The system is based upon the unique radar designed by NRS. The key features of the radar are:

  Ka band frequency with a corresponding wavelength of less than 1 cm, which allow for the detection of very small objects such as FOD.

  High gain separate transmit and receive antennas which allow for the detection of weak signals from small targets at distance such as FOD, bird and drones.

  A pedestal on which the antennas are mounted which provides ability to steer antenna beams in any direction and elevation desired.

To supplement this advanced radar, one or more high performance commercial off the shelf video cameras will provide final classification of any target which the radar cannot classify. The cameras will be steered to potential targets by the radar based upon its initial detections or manually if desired by the operator.

The FODDBASA can detect Foreign Object Debris (FOD) on runways, drones as well as birds in the airport to mitigate the safety of flight risk posed by these objects.

The FODDBASA is unique in being able to address these safety flight risks with a single system providing a much more cost efficient solution for airports compared to operating 3 systems each addressing only one of these risks. 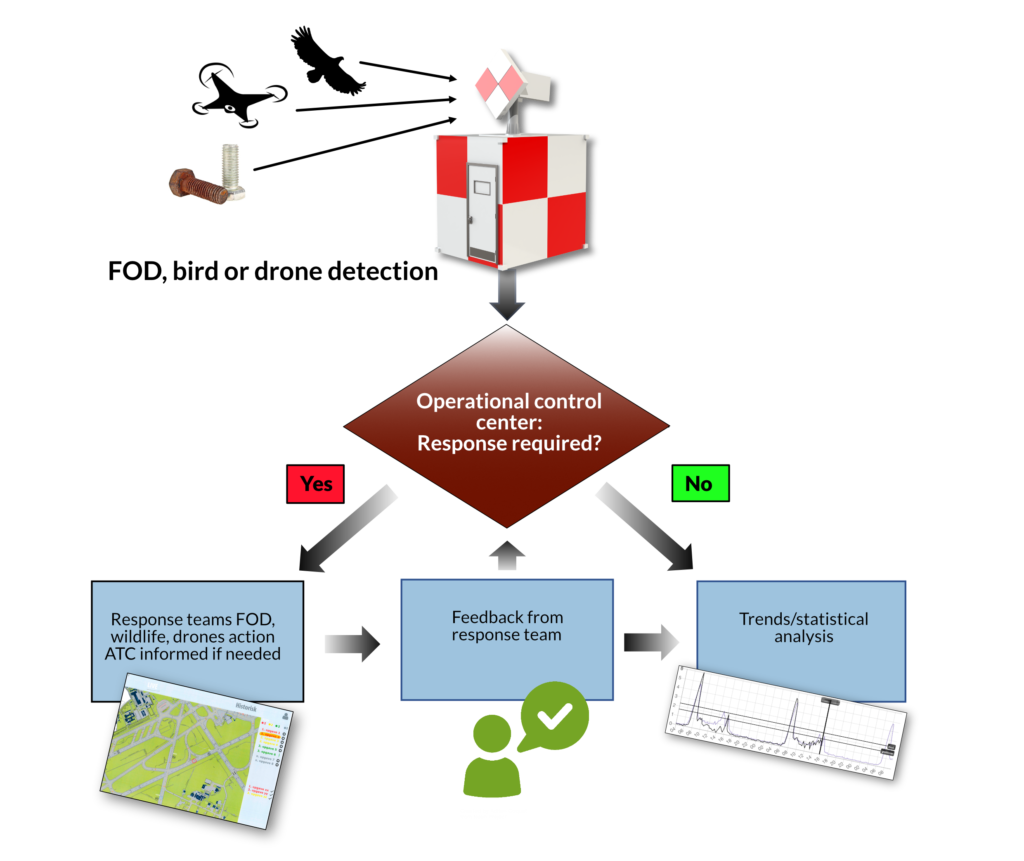 The output from FODDBASA will feed into an airport systems/organizations which addresses FOD, drones and birds. This is typically separate functions in the airport and hence the data flow will reflect this and is illustrated below. Not every airport is organized the same way and the FODDBASA data flow will be adapted accordingly.

FODDBASA will also maintain statistical data which can be utilized for monitoring trends in FOD and bird activity, key information needed in planning of FOD prevention and wildlife management. The statistical data will also support reporting to airport safety reviews and aviation authorities.

We use cookies on our website to give you the most relevant experience by remembering your preferences and repeat visits. By clicking “Accept”, you consent to the use of ALL the cookies.
Cookie settingsACCEPT
Manage consent

This website uses cookies to improve your experience while you navigate through the website. Out of these, the cookies that are categorized as necessary are stored on your browser as they are essential for the working of basic functionalities of the website. We also use third-party cookies that help us analyze and understand how you use this website. These cookies will be stored in your browser only with your consent. You also have the option to opt-out of these cookies. But opting out of some of these cookies may affect your browsing experience.
Necessary Always Enabled
Necessary cookies are absolutely essential for the website to function properly. This category only includes cookies that ensures basic functionalities and security features of the website. These cookies do not store any personal information.
Non-necessary
Any cookies that may not be particularly necessary for the website to function and is used specifically to collect user personal data via analytics, ads, other embedded contents are termed as non-necessary cookies. It is mandatory to procure user consent prior to running these cookies on your website.
SAVE & ACCEPT
Send us a mail
Call us on the phone
Meet us over at LinkedIn
How to get in contact with us